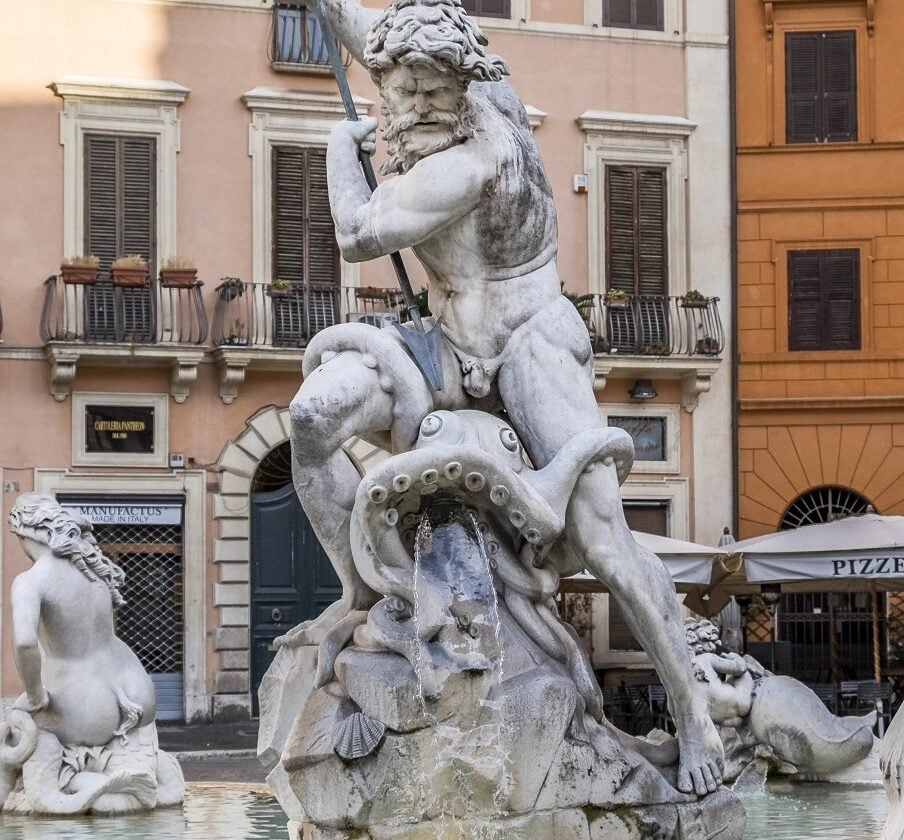 Share on Facebook Share on Twitter Share on LinkedIn Share via email
Legend has it that if you toss a coin into the waters of the Baroque Trevi Fountain, over your left shoulder, and with your back turned to it, you’ll be sure to return to Rome on another trip. And it’s undoubtedly a masterpiece worthy of admiration. But it’s also well worth venturing out to see the city’s other magnificent fountains, from Bernini’s La Barcaccia at the Spanish Steps, and Four Rivers at Piazza Navona. 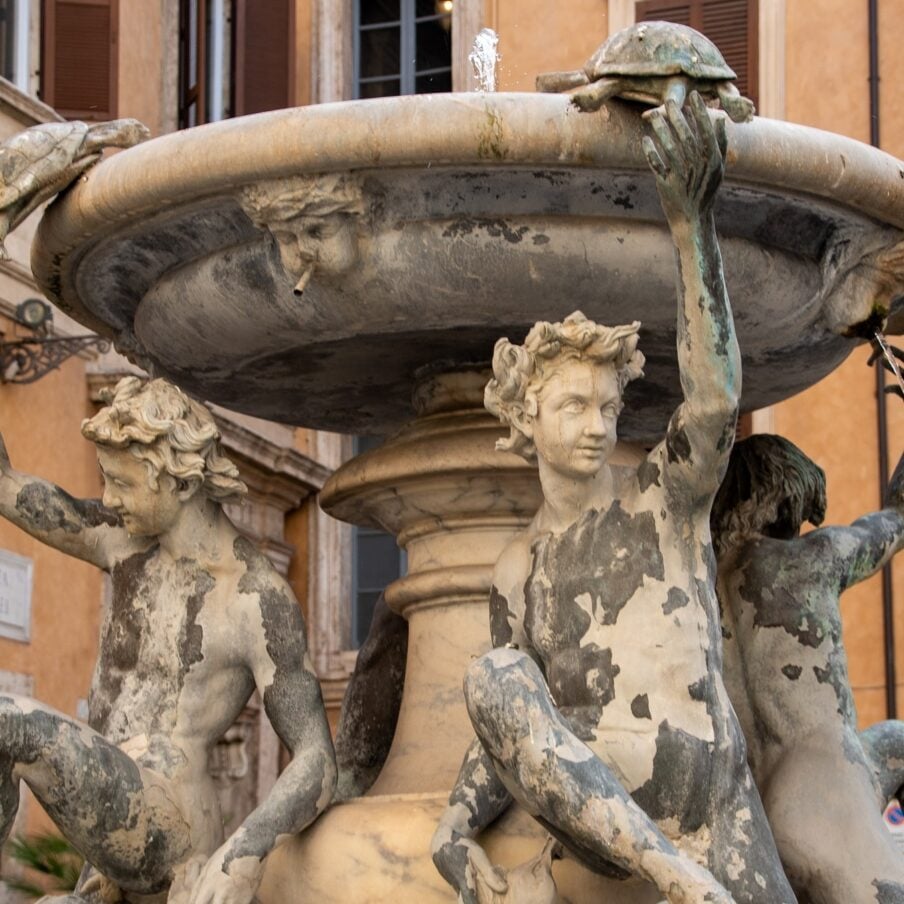 It’s a masterpiece you’re unlikely to forget: Four young men riding on the backs of dolphins, elegantly raising bronze tortoises into a marble bowl of water above their heads. Created by Giacomo della Porta and Taddeo Landini in the late 16th century, and which, according to a popular legend, was built in one single night. It really took several years to sculpt, and was later decorated with tortoises by either Gian Lorenzo Bernini or Andrea Sacchi. Located on the Piazza Mattei, which is named after the family that funded the fountain, its purpose during the late Renaissance was to supply water to the whole neighbourhood.

There’s a unique story behind the Fontana della Barcaccia, which is located on the Piazza di Spagna. If you look closely, you’ll see that the fountain is slightly below street level, almost sinking. Commissioned by Pope Urban VIII, it is believed to have been completed by Pietro Bernini and his son Gian Lorenzo Bernini, and was designed that way due to the aqueduct’s low water pressure. They are said to have been inspired by the flooding of the Tiber river in 1598 when, according to popular legend, a boat was left behind on the piazza. 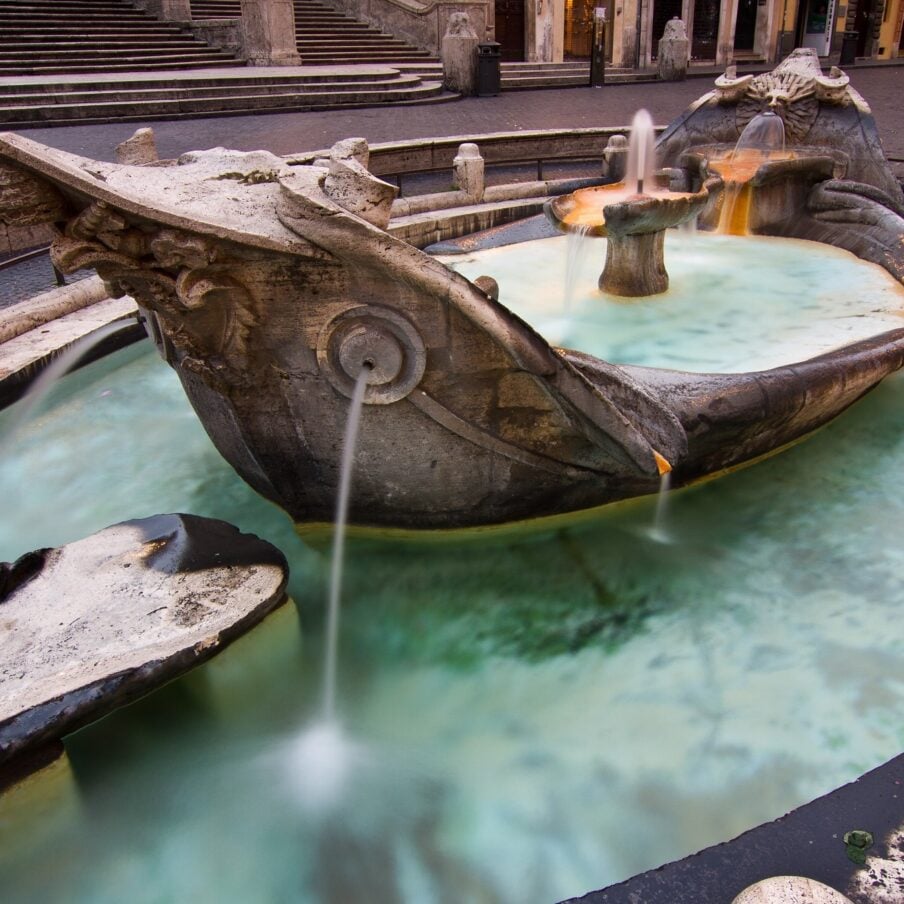 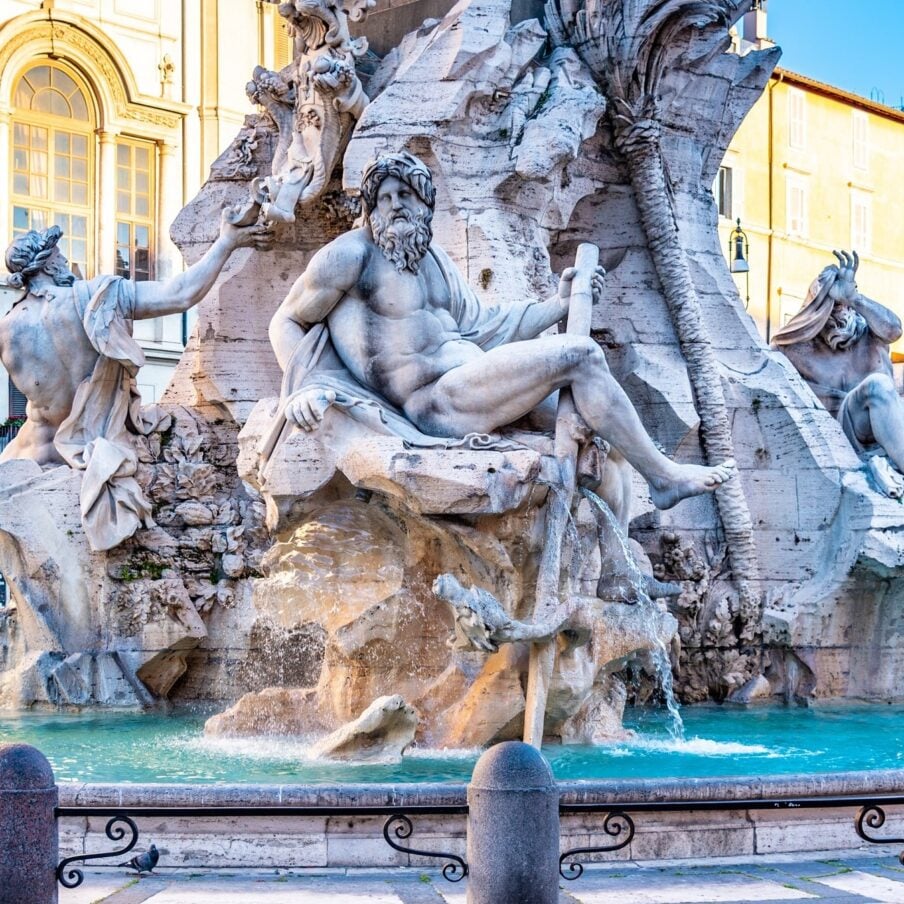 Located on the iconic Piazza Navona, the Fontana dei Quattro Fiumi depicts twisting and turning muscular Gods of four major rivers where Christianity had reached: the Nile in Africa, the Ganges in Asia, the Danube in Europe and the Río de la Plata in America. Designed by Gian Lorenzo Bernini in 1651, the fountain is built around a 16m Egyptian obelisk surmounted by a dove, symbolising the Pamphilis family. The God of the Ganges river is seen carrying a long oar, representing the river’s navigability. Animals and plants of the different countries are shown nestling among the protagonists.

The last major commission that Gian Lorenzo Bernini got from his patron, Pope Urban VIII, the 17th-century Fontana del Tritone is located in the Piazza Barberini and depicts a huge Triton – a fish-tailed sea-god. His head is leaning back, and he’s kneeling down supported by four dolphins, raising a conch. Bernini was inspired by Ovid’s Metamorphosis, which tells the story of how Triton, Neptune’s son, ended a great flood just by blowing his horn. And the same legend that applies to the Trevi Fountain applies to the Tritone: Toss a coin in the fountain and you’ll be sure to return to Rome! 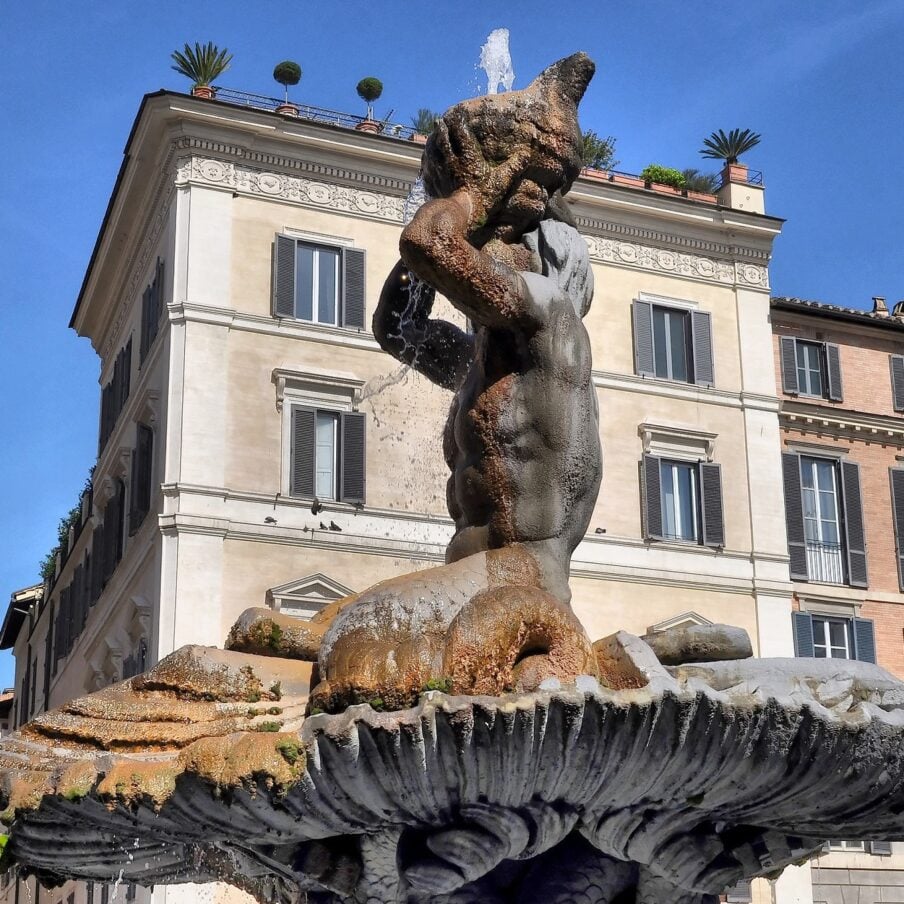 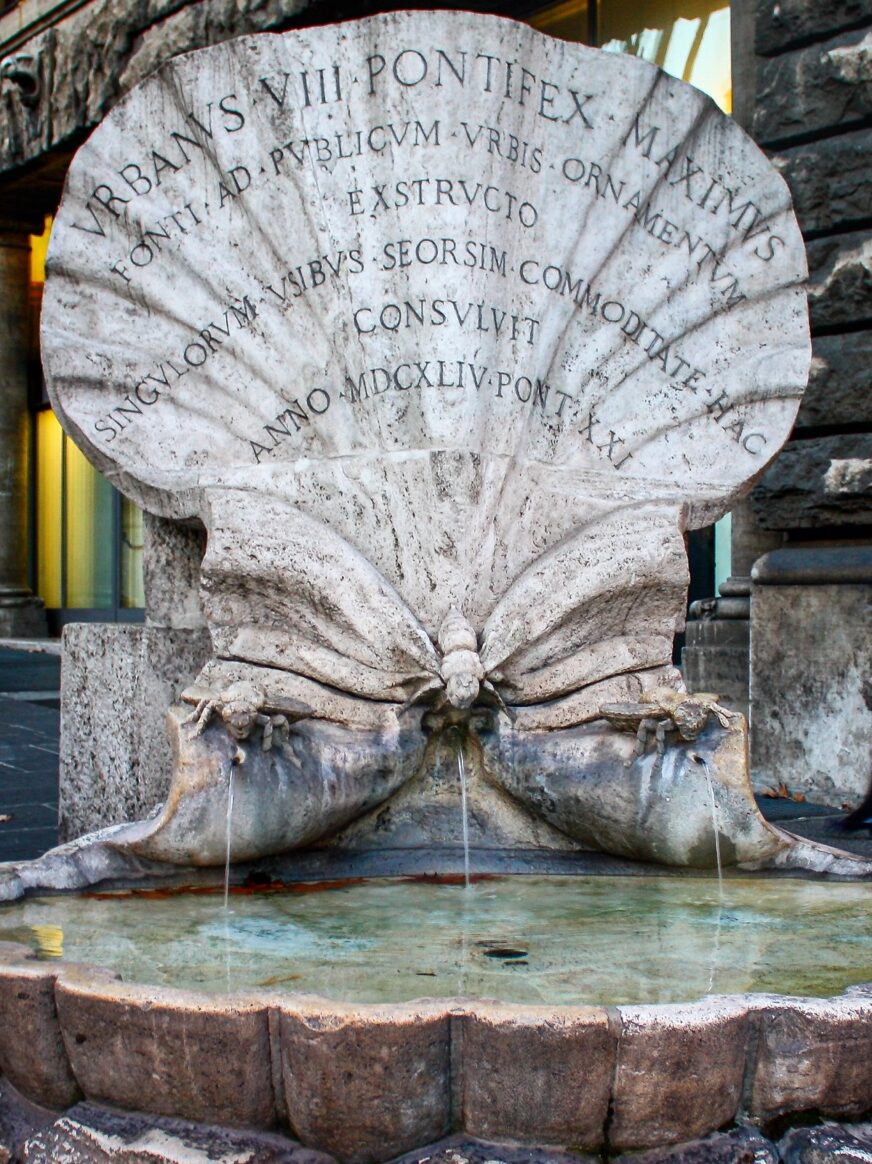 Created in 1644 by the Baroque architect and sculptor, Gian Lorenzo Bernini, using a casting technique known as ‘lost-wax’ (which involves creating a model from wax) Fontana delle Api is located in Piazza Barberini, close to Fontana del Tritone and around the corner from Hotel Eden. The fountain consists of a large marble shell with three bees resting at its base, symbolising the Barberini family, and its purpose originally was to provide water for horses. A prominent inscription details it was built by Pope Urbano VIII (a Barberini) for the people of Rome. 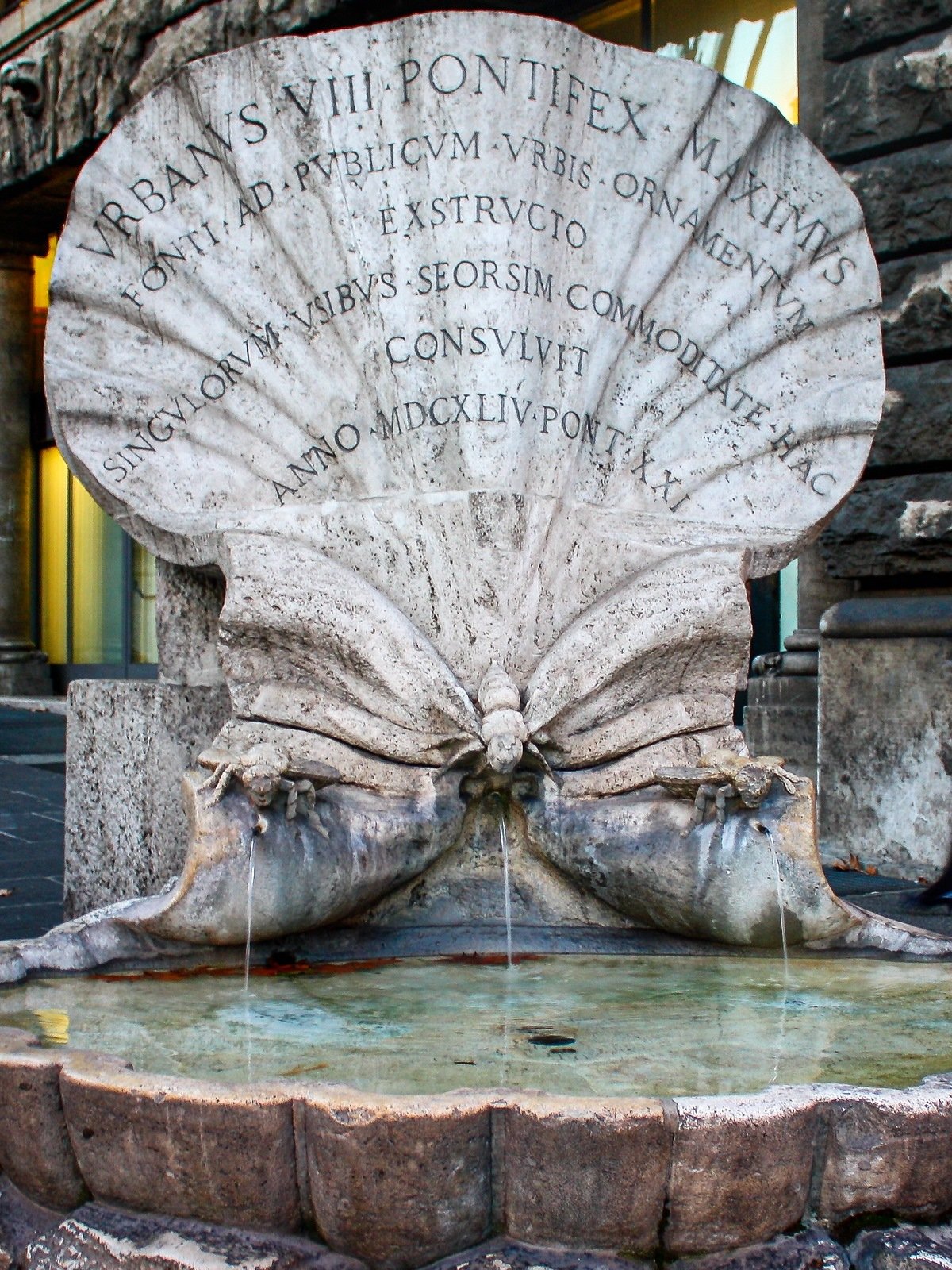 The fountains that embellish and enliven Rome are all within easy reach of Hotel Eden, and well worth exploring during your time in the Eternal City.