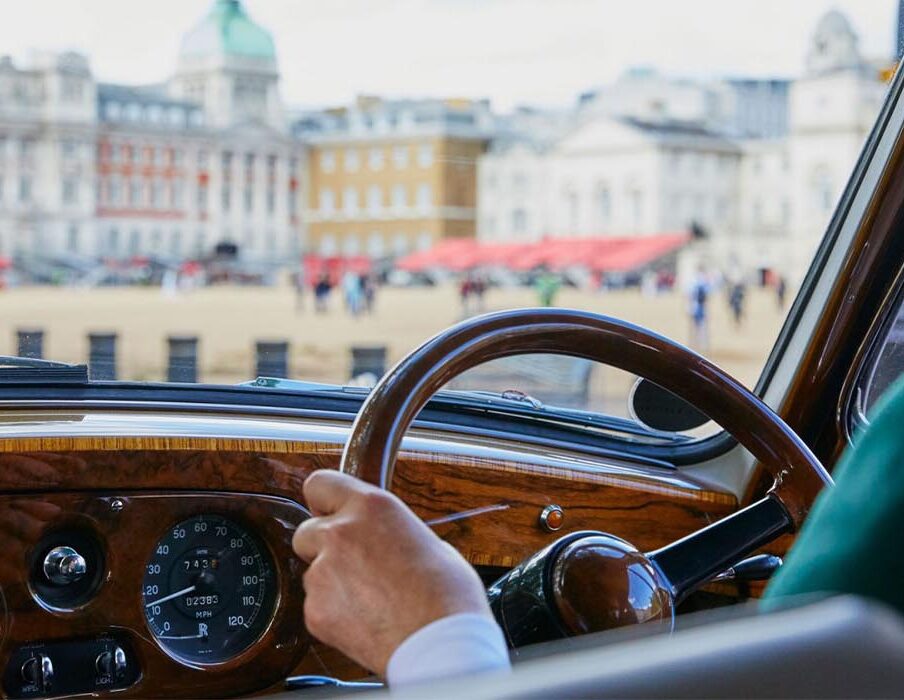 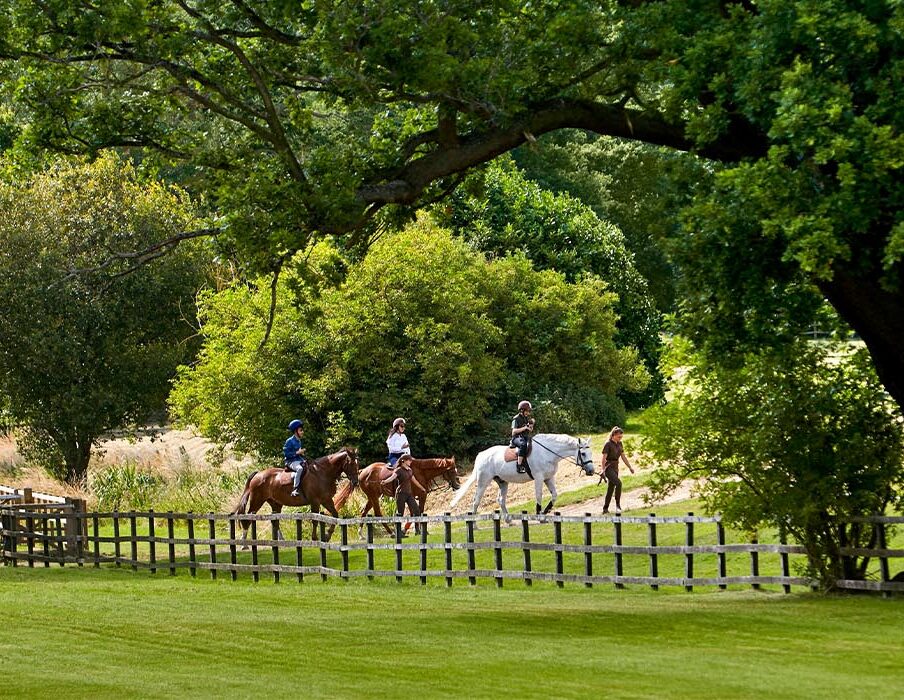 Coworth Park, about an hour’s drive from London, is the perfect getaway from the hustle and bustle of the big city. Harbouring two polo fields, its lush 240 acres are a country oasis, offering the finest of equestrian grounds next to magnificent meadows and a serene lake. Paradise found, not too far away.

It’s in the bag! V&A rummages deep into fashion’s favourite accessory in the exhibition ‘Bags: Inside Out’. 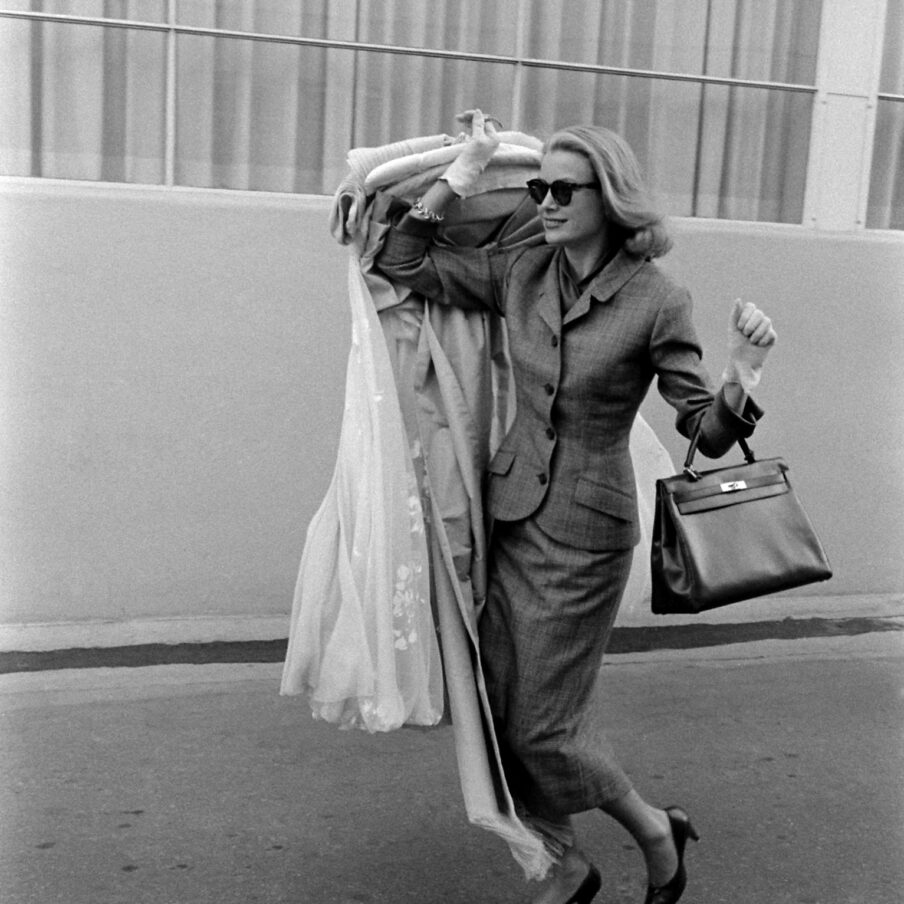 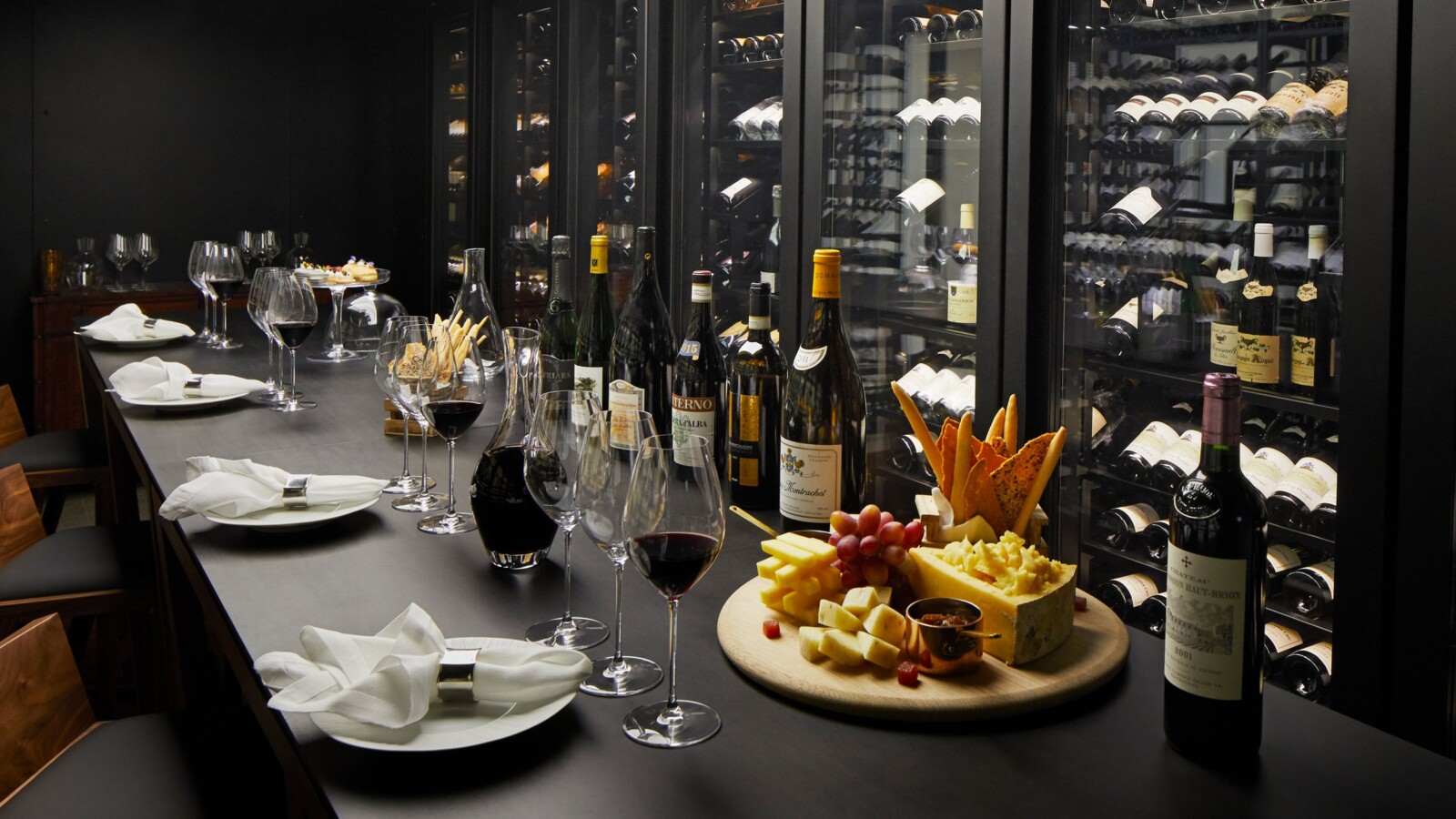 The Dorchester’s hidden sommelier’s cellar, The Wine Vault, is the ideal space to discover delicious vintages in private company. Modern and intimate for up to 12 guests, The Dorchester’s head of wines, master t sommelier Christopher Delalonde, one of only 269 prosommelier in the world to claim this distinction, weaves insightful storytelling around some of the hotel’s most exceptional wines. Over a handcrafted walnut tasting table and under lighting designed for the ideal study of wine colour, 1000 selected bottles line the walls of London’s latest wine-lover’s retreat.

From function-focused sportswear to urban status symbols, the full gamut of sneakers takes centre stage in the Design Museum’s exhibition. ‘Sneakers Unboxed: Studio to Street Cult’ presents classic, limited-edition and rare pairs as well as an insight into the innovative processes behind their creation. 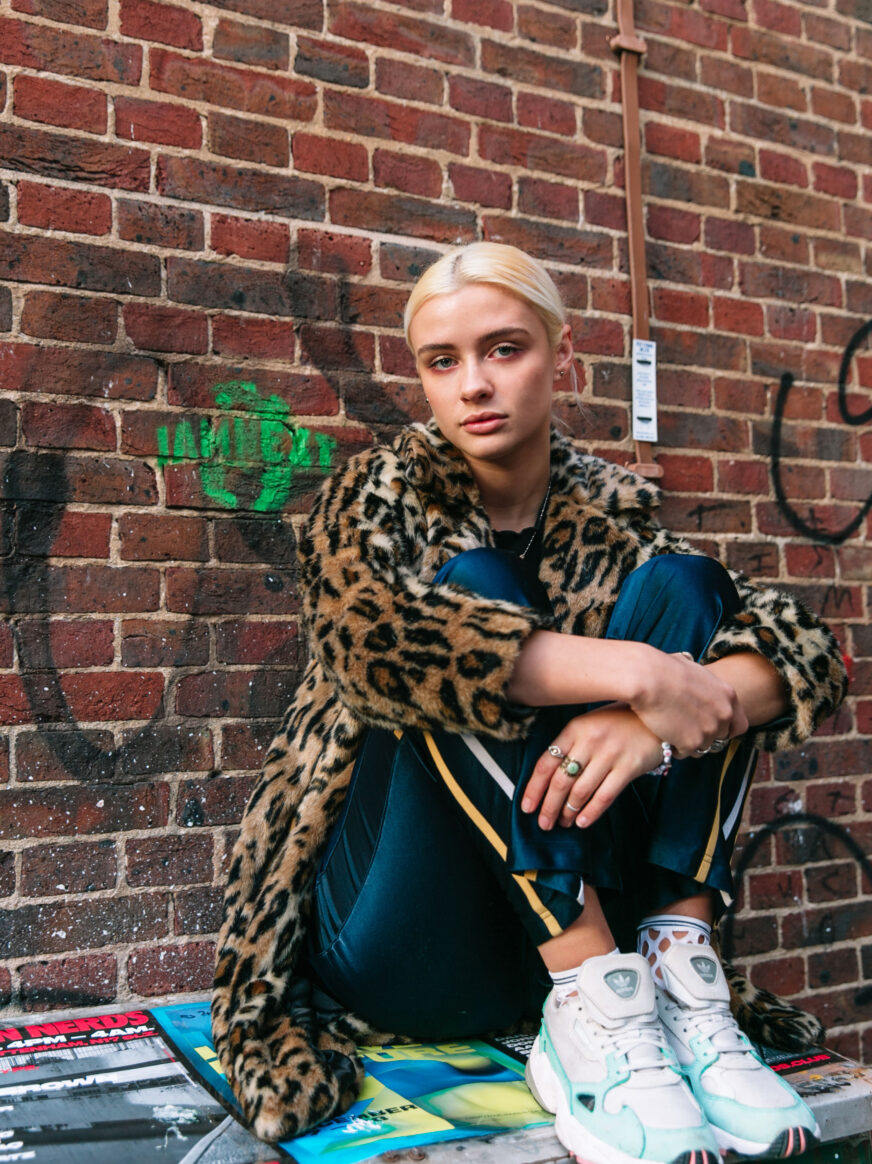 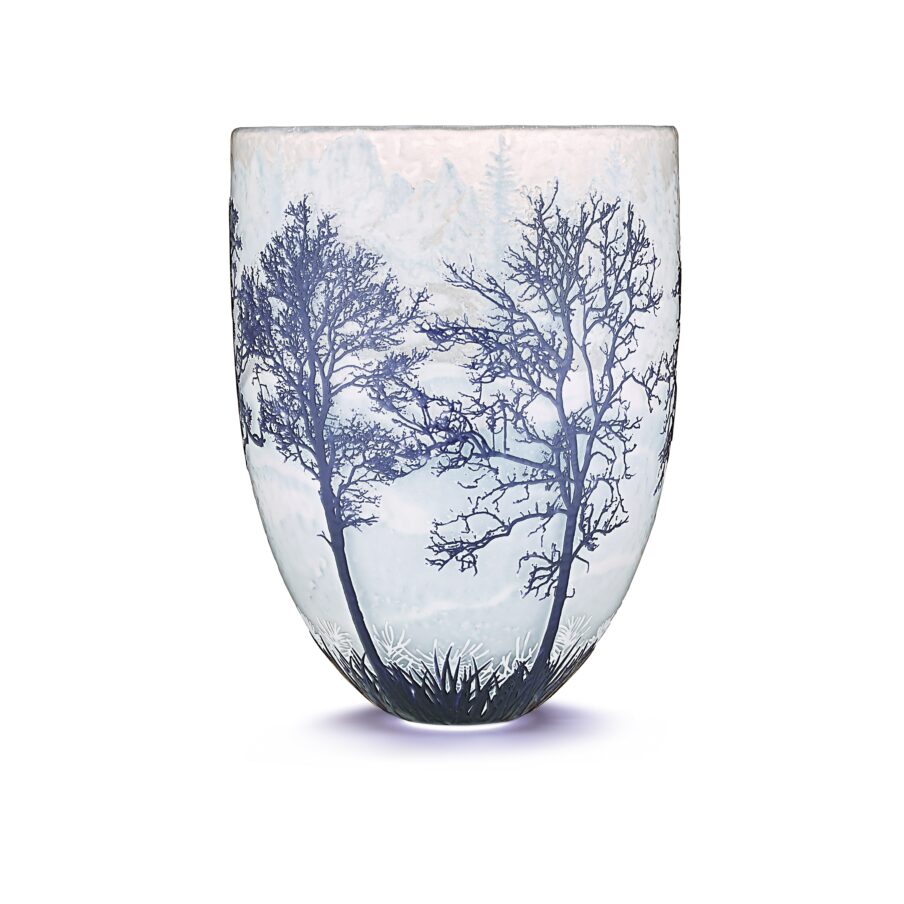 A site-specific artwork by celebrated British pop artist Sir Peter Blake CBE hangs on the walls of London’s 45 Park Lane Penthouse Suite. Today an octogenarian, still at work, he continues taking others into new reveries with his pop perspective. His ‘Sgt. Pepper’s Lonely Hearts Club Band’ album cover for The Beatles, a colourful image depicting the “Fab Four” in front of a collage of celebrities and historical figures, has been widely lauded for expanding the graphic design industry into popular music, making the connections between art and pop explicit.

‘Dancing Girls Over Rotten Row’, a recent work by Sir Peter Blake, expresses style diversions and similarities from his most famous work. The image is vibrant and distinctly, historically London. ‘Rotten Row’ is a broad track running along the south side of Hyde Park; during the 18th and 19th centuries, it was a fashionable place for upper-class Londoners to be seen horse riding. It was also the first artificially lit highway in Britain. “When I started to make this print, I did what I always do which is to think of the area, in this case, Hyde Park. I researched vintage postcards of Rotten Row and came up with images upon which I collaged the figures dancing over it. There are various kinds of theatrical characters that I use in my work but, for here, in my mind they are a famous troupe of dancers doing their performance in Hyde Park,” the artist explains.

Sir Peter Blake has generations of perspective on the career of being an artist. “My career is over, and I realise that. But I’m still working; I’m still an artist. I made a sort of ‘conceptual retirement’, which meant that I still work but that I would retire from greed, avarice, ambition, the nasty side of art.” He now cultivates all categories of work, including sculpture, for a career perhaps freer than it has ever been. Sir Peter Blake’s work, at least at 45 Park Lane, dances above Hyde Park and history all at once. 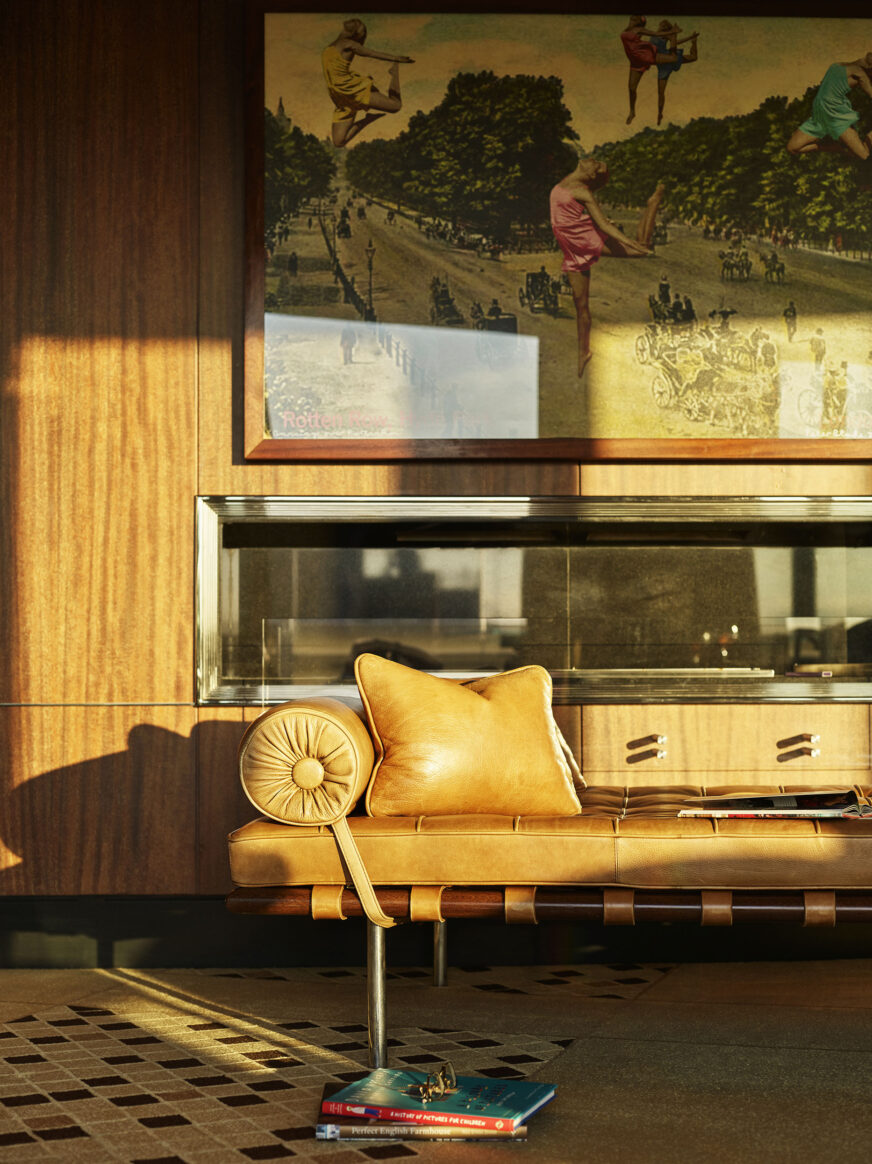 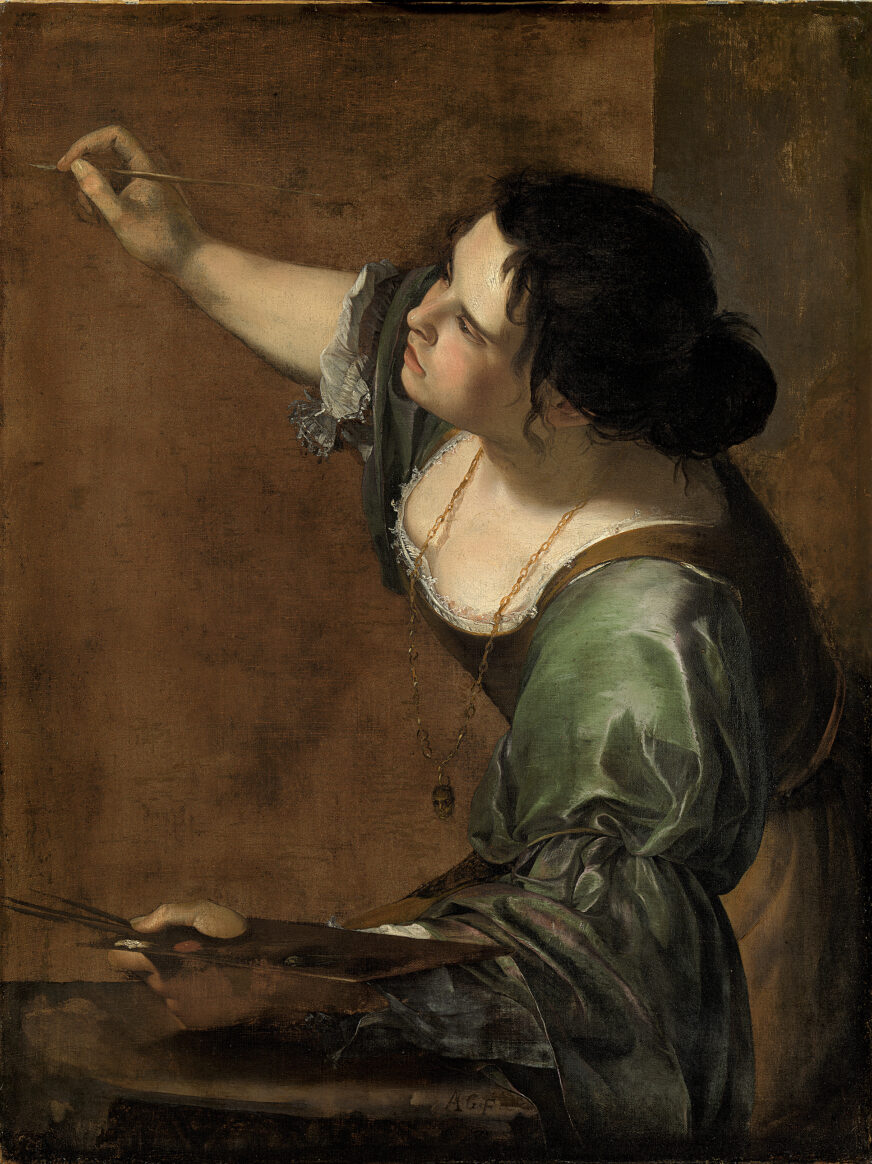 Artemisia Gentileschi, Self Portrait as the Allegory of Painting

One of the most important female artists of the 17th century, described by The Guardian as “more savage than Caravaggio”, Artemisia is an endlessly fascinating woman. Recognised as one of the most gifted of the Italian Baroque period, her artistic genius comes into focus at The National Gallery. The exhibition brings together around thirty of her works, the majority of the loans never having been seen in the UK before.

South African visual activist and artist Zanele Muholi came to prominence in the early 2000s with photographs that told the stories black lesbian, gay, bisexual, trans, queer and intersex lives in South Africa. Now at the Tate, Muholi has her first major UK exhibition showcasing 260 photographs, from the very first body of work ‘Only Half the Picture’, to the on-going series ‘Somnyama Ngonyama’, continuously challenging dominant ideologies and representations. 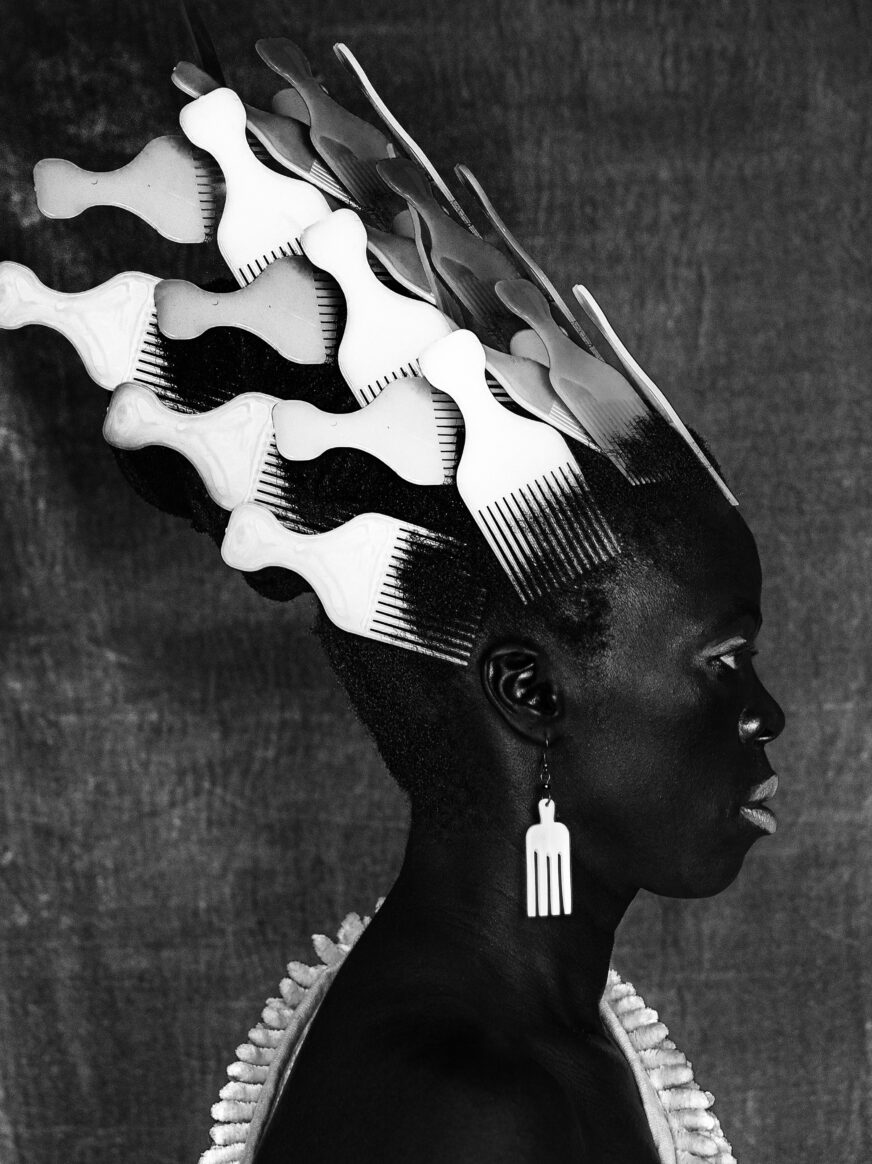 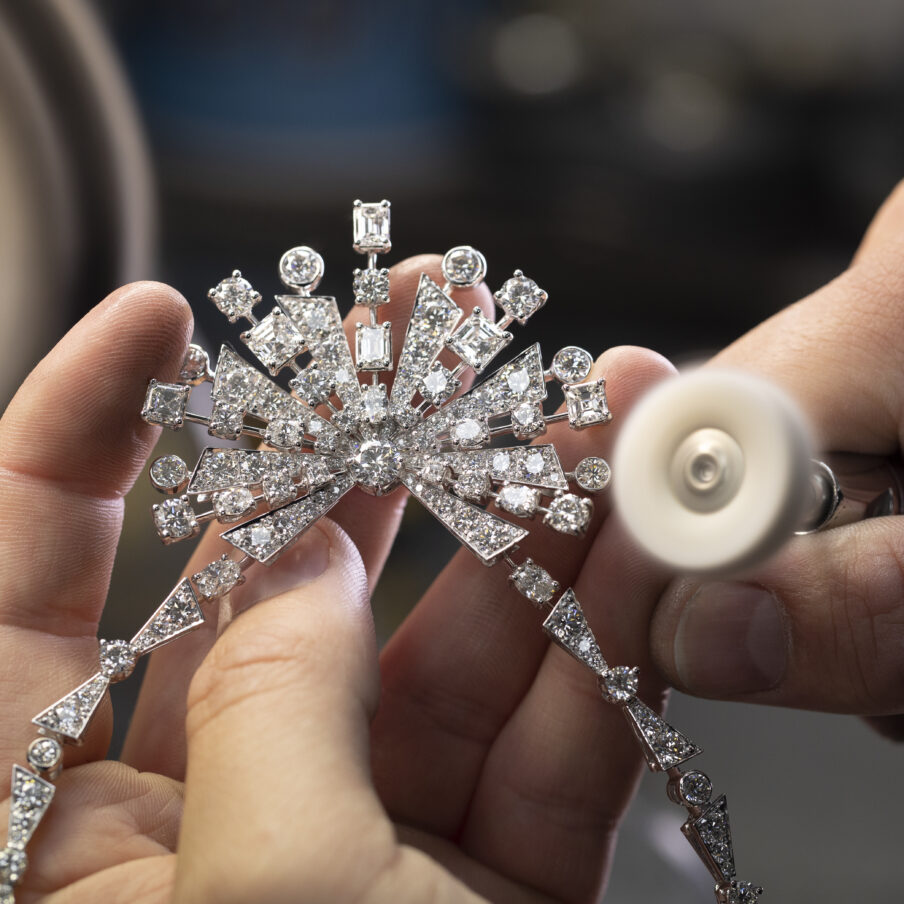 Graff’s Bond Street store, where finished jewels can be seen, have their pieces created in Graff’s workshop. It is situated in Mayfair, London and is one of the largest of its kind in Europe, with more than 60 traditional jewellers’ benches. Inside, time-tested traditions and techniques are honoured, with craftsmen using tools that have remained unaltered for years. Each masterpiece requires often several hundred hours of work. State-of-the-art technology functions as an additional tool for final touches_melding the old and the new for the perfect craft.

Due to their light-sensitivity, watercolour are rarely displayed. With the  Renaissance Watercolours: from Dürer to Van Dyck’ exhibition at the V&A, visitors get a rare opportunity to see 200 of some of the finest watercolour masterpieces from the Renaissance era. The exhibition features vibrant sketches by Leonardo da Vinci and Sir Anthony van Dyck, highly-finished works by Albrecht Dürer and Simon Bening, and life-like portrait miniatures by Hans Holbein and Nicholas Hilliard. 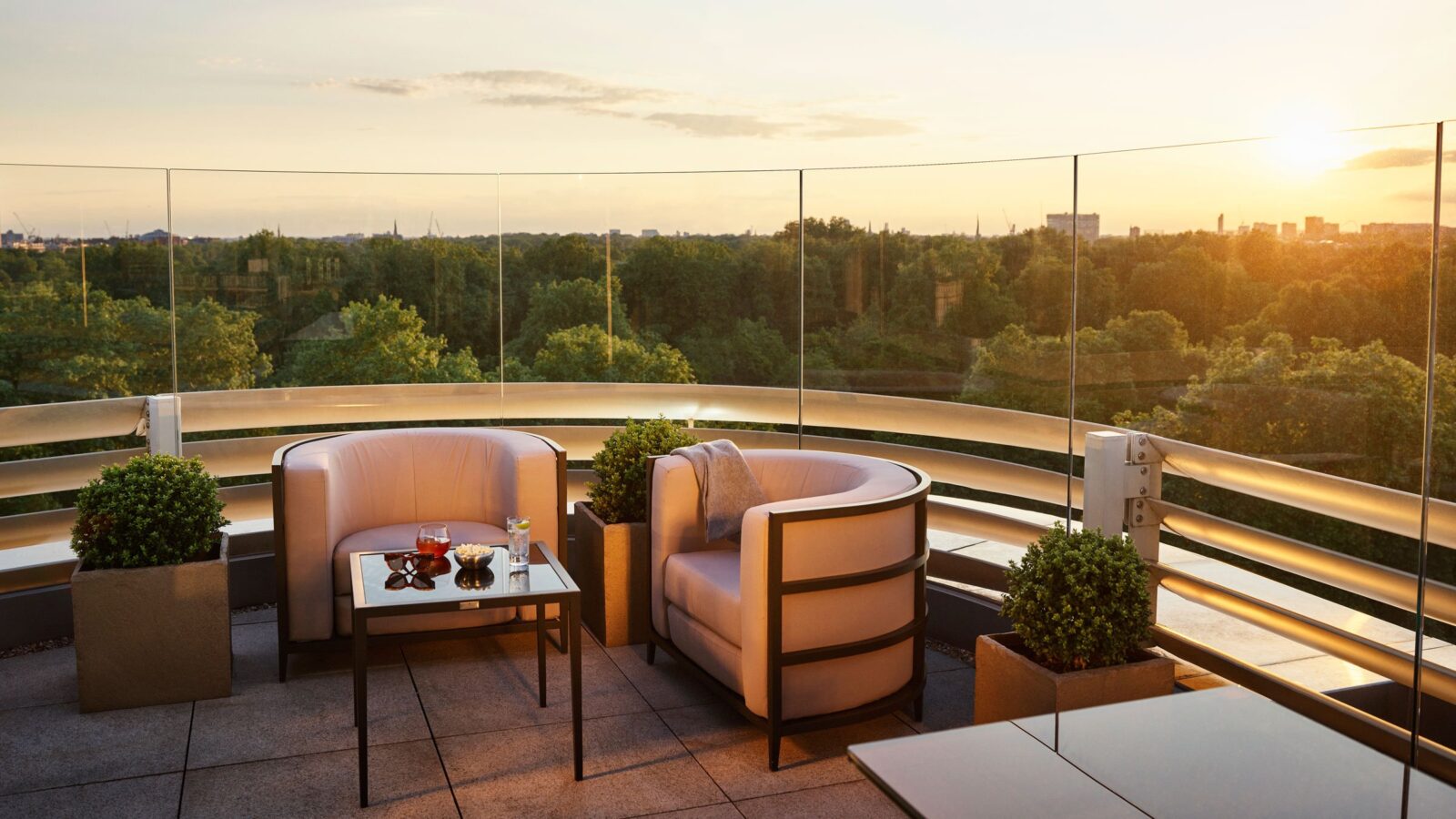 The balcony of the Eisenhower Suite at The Dorchester offers privacy, shade and a breath of fresh air in the heart of London, looking out upon Park Lane and beyond, with magnificent plane trees and other urban greenery. 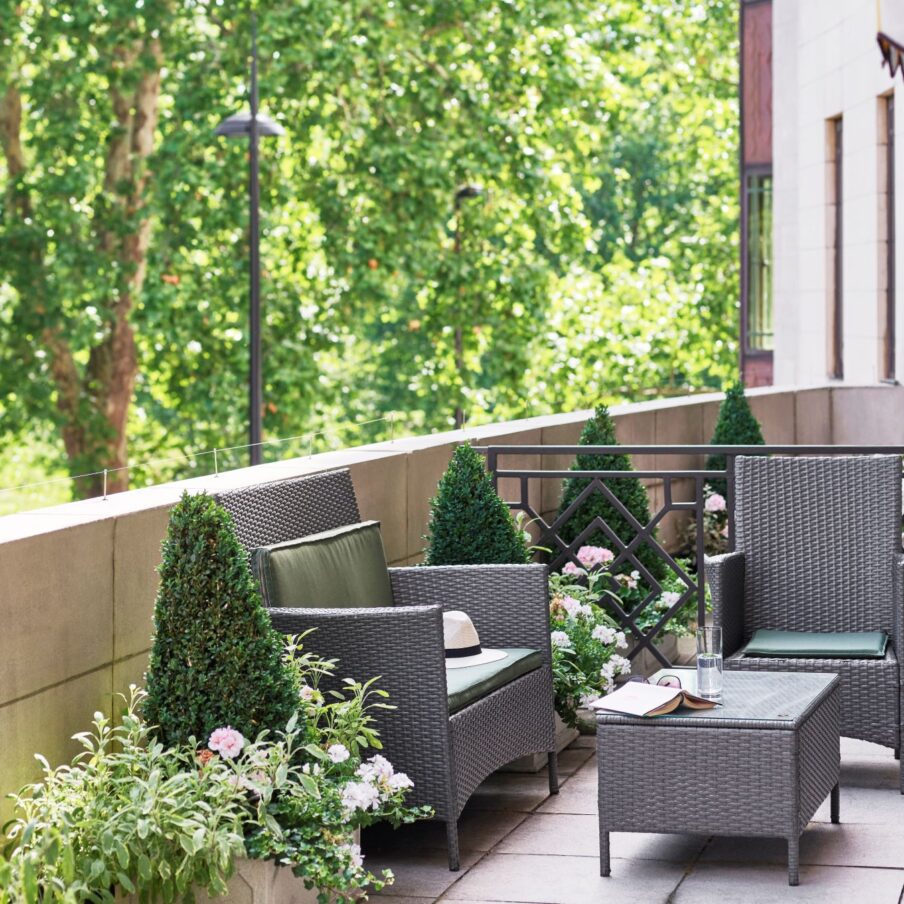 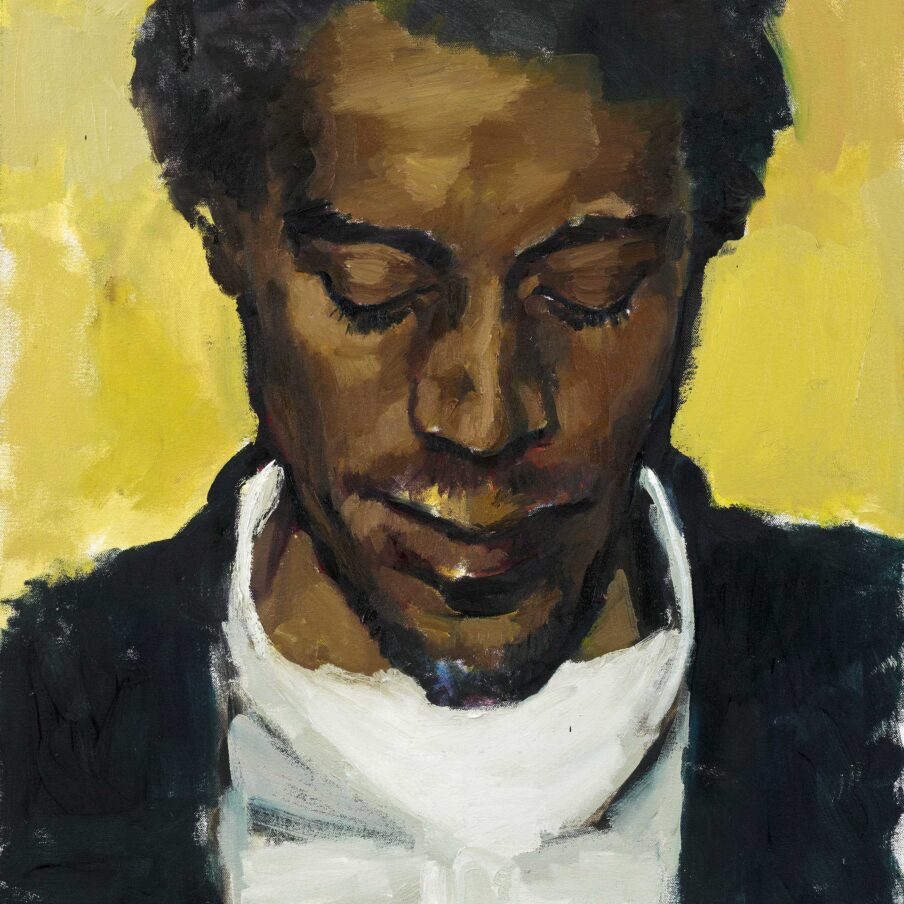 Lynette Yiadom-Boakye: Fly In League With The Night
Until 9 May 2021,
Tate Britain,
Millbank,
London SW1P 4RG

Movement, displacement, perception and transformation have remained consistent themes for Hungarian artist Dóra Maurer, whose largest UK exhibition brings together some 35 works. The show reveals the diversity of her output, including graphic works, photographs, films and paintings. Trained as a graphic artist in the 1950s, Maurer pushed the medium to its limit throughout her experimental career which spans more than five decades. Maurer was at the centre of an underground independent community of artists outside of the official Hungarian system during the socialist period. 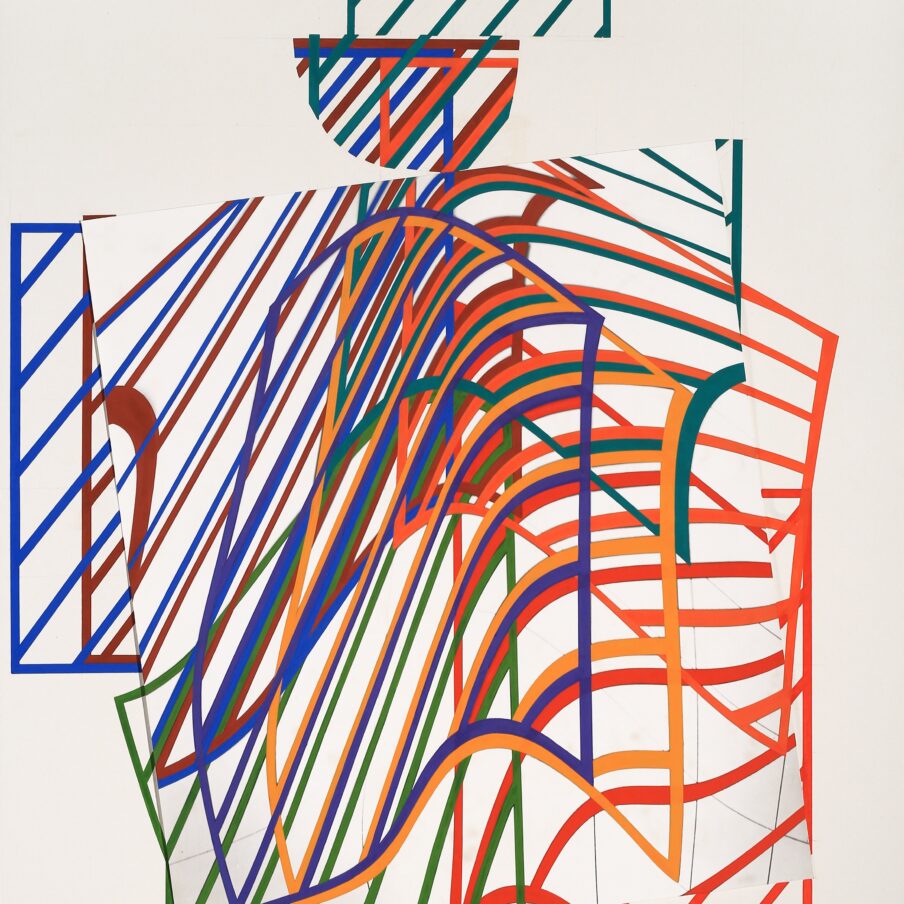 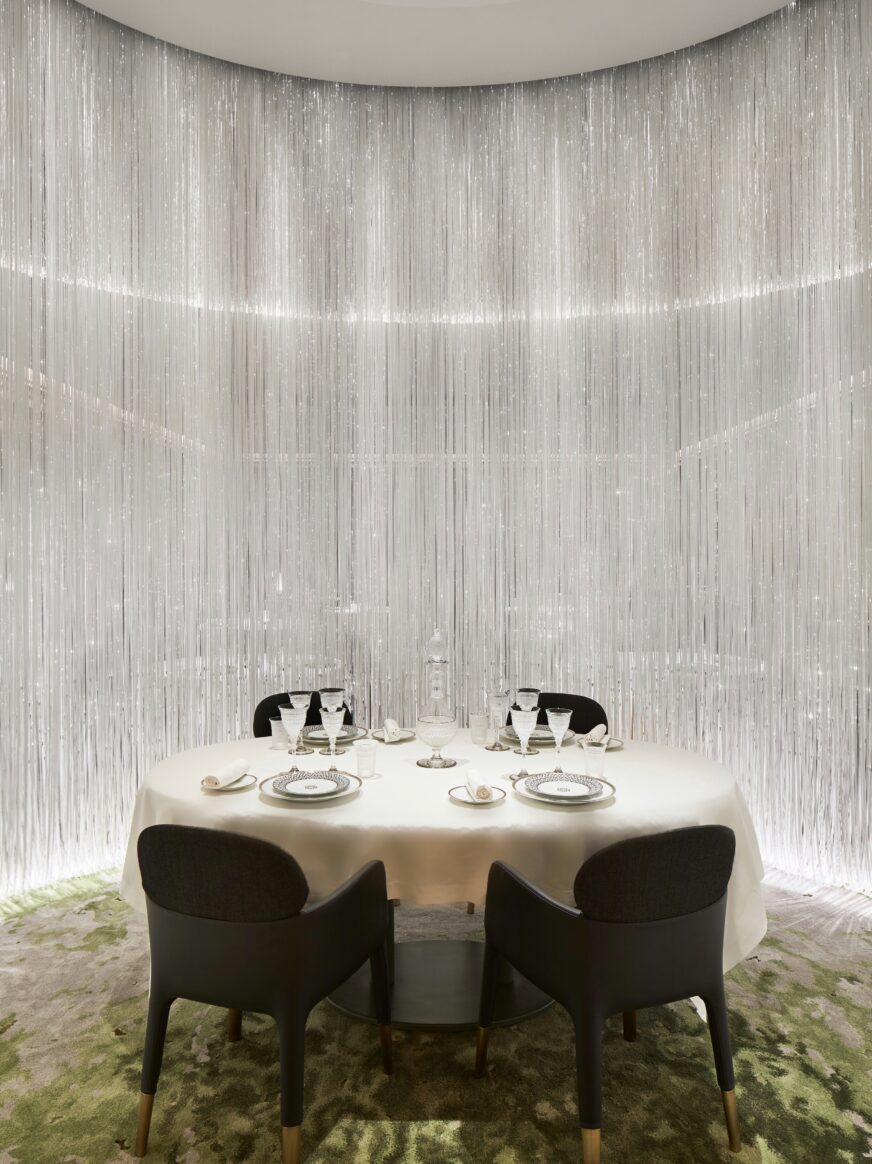 French design duo Jouin Manku have revisited their seminal concept for the three Michelin-starred restaurant, Alain Ducasse at The Dorchester, revitalising the original mise-en-scène with a touch of magic and sparkle to enhance the dramatic theatre of the dining experience. The pièce de resistance is the ‘Table Lumière’, a luminous semi-private table in the middle of the restaurant that transports guests to a special and intimate world apart.#

An allegory for the subconscious dream state? An allusion to the use of psychedelics?…or simply a fantastical work of nonsensical folly? Regardless of the many disputing theories as to its meanings, or perhaps thanks to these, one thing is undeniable: ‘Alice in Wonderland’ has captured the imagination and awe of children and adults alike, continuously, for the past 157 years.

Paying tribute to this enduring and elusive tale written by Lewis Carroll, the V&A Museum holds an exhibition exploring its origins, adaptations and reinventions, those which have pervaded every medium of pop culture since, from film, to fashion, to art, to music. Most recently, Lady Gaga featured a song inspired by Alice in her latest album ‘Chromatica’. Among the 300 objects on view are costumes and sketches from Tim Burton’s adaptation on the big screen, Alice in Wonderland (2010), the fifth highest-grossing film of all time during its theatrical run, as well as concept art from Walt Disney’s ever-iconic 1951 animated film of the same name.

Alice in Wonderland’s spirit of wild imagination is infectious: its surrealist world has appealed to artists such as Salvador Dalí and Dorothea Tanning who have created related oeuvres, and its extravagant characters have even inspired high-fashion looks, such as the Mad Hatter appearing on the runway of Viktor & Rolf’s Haute Couture show at Paris Fashion Week. Curious indeed. 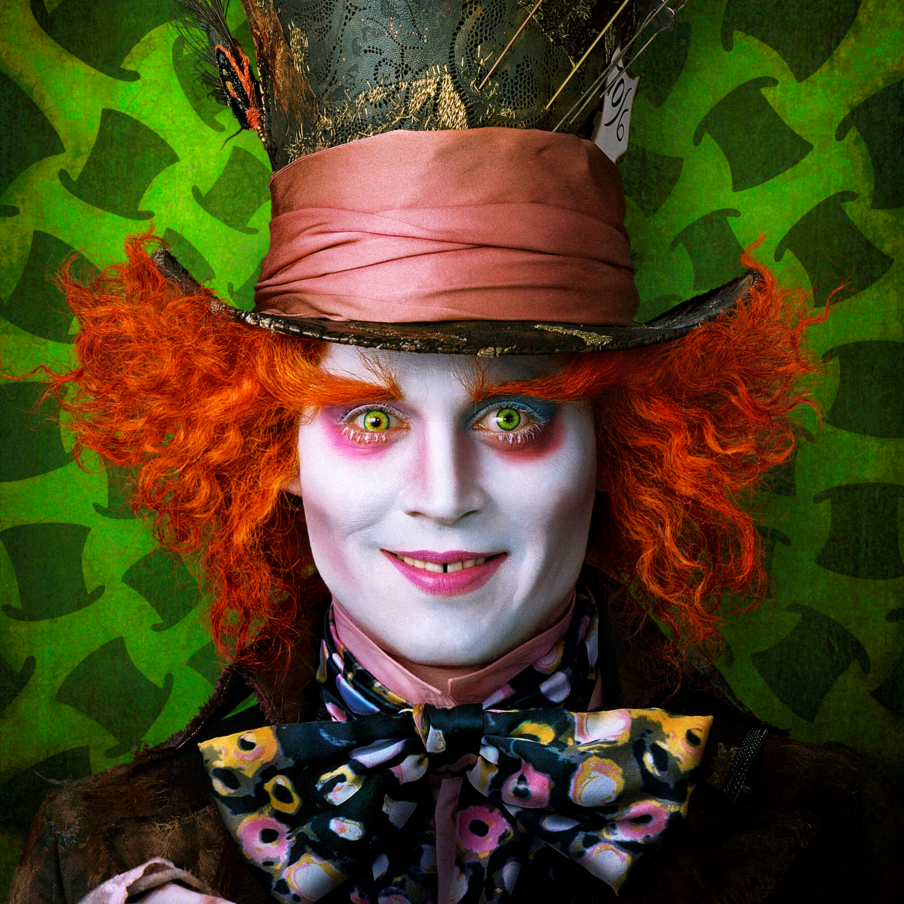